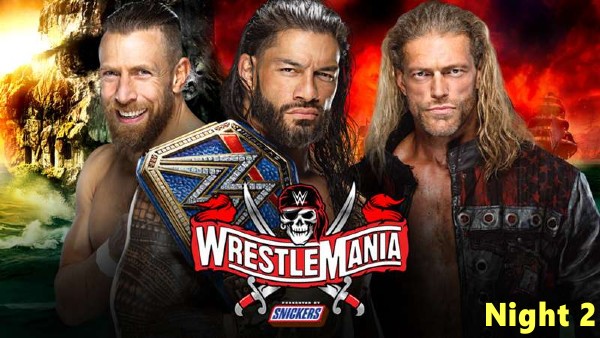 # Singles match
* The Fiend (with Alexa Bliss) vs. Randy Orton

# Raw Women’s Champion Asuka vs. Rhea Ripley
– The Empress vs. The Nightmare on The Grandest Stage of Them All? Yes, please.
Following weeks of videos warning of her arrival to Monday nights, Rhea Ripley finally showed up on Raw to make a statement by challenging Asuka to a match for the Raw Women’s Championship at WrestleMania.
Asuka’s swift acceptance of the challenge sets the stage for an epic first-time matchup between two of the greatest champions in NXT history. The Empress has certainly racked up her fair share of accomplishments since her days on the black-and-yellow brand, but Ripley looks to win her very first Raw Women’s Title, fittingly, at Raymond James Stadium in Tampa, where she was originally supposed to defend her NXT Women’s Championship just one year ago against Charlotte Flair. One question remains heading into this year’s Show of Shows: Will Rhea Ripley be ready for Asuka? Don’t miss WrestleMania on Saturday, April 10 and Sunday, April 11, streaming live at 8 ET

# The Fiend vs. Randy Orton
– He has returned, and that’s not good news for Randy Orton.
After The Viper sadistically set The Fiend on fire back at WWE TLC, there was no telling if The Fiend would ever be seen again. As Alexa Bliss slowly started to warn Orton of his inevitable return, it was only a matter of time before her premonitions would come to fruition. At WWE Fastlane, The Fiend emerged from the wreckage of being burned, and after being summoned by Orton the following night on Raw, made his cruel intentions clear to finally settle this brutal score with The Legend Killer once and for all at WrestleMania. Will Orton overcome The Fiend, who is seemingly more unstoppable than ever, or will The Fiend complete his comeback from the ashes and rid himself of The Viper for good? Don’t miss WrestleMania on Saturday, April 10 and Sunday, April 11, streaming live at 8 ET

# Intercontinental Champion Big E vs. Apollo Crews (Nigerian Drum Fight)
– Big E and Apollo Crews have pushed each other to new levels, but a WrestleMania rematch will bring the rivalry to all new heights. The Intercontinental Champion scored a win over Crews at WWE Fastlane, but the Nigerian warrior unleashed fury on his opponent with a brutal post-match beatdown. Crews secured the latest victory in a Six-Man Tag Team Match alongside Otis & Chad Gable against The Powerhouse of Positivity & The Street Profits.
The contest grew more and more personal on The Road to WrestleMania which led Apollo Crews to propose that their Intercontinental Championship Match be a Nigerian Drum Fight Will Big E meet Crews’ vicious tactics? Or will the challenger realize his championship dreams at The Showcase of the Immortals? Don’t miss the championship clash at WWE Wrestlemania 37, streaming live as part of a two-night event, beginning at 8 ET

# Kevin Owens vs. Sami Zayn
– Sami Zayn has battled against the conspiracies he feels have been plaguing his WWE career, but now the seemingly paranoid Superstar will have to face Kevin Owens at WrestleMania. Zayn unsuccessfully attempted to reveal the “truth” to Owens, and a chaotic “KO Show” encounter paved the way for a showdown at The Show of Shows. Zayn believes him and his old friend could have ruled WWE, but at WrestleMania they will settle their long-simmering differences in the ring. Will KO deliver another signature WrestleMania moment with a win? Or will Zayn’s manic obsessions lead to big-stage brilliance? Don’t miss the heated matchup at WWE Wrestlemania 37, streaming live as part of a two-night event, beginning at 8 ET

# United States Champion Riddle vs. Sheamus
– Riddle’s chill championship vibes have clashed with Sheamus’ explosive anger on Monday Night Raw, and at WrestleMania, the two in-ring warriors will battle for the United States Championship. A callous beatdown of The Original Bro with his own scooter signaled The Celtic Warrior’s United States Title intentions, and a punishing victory over the champion on the following Raw made them even clearer. Sheamus is looking to become a three-time United States Champion, while Riddle looks to solidify his ascent on Raw by toppling one of its most accomplished Superstars. Who will walk out of The Showcase of the Immortals with the Universal Title? Don’t miss the title showdown at WWE Wrestlemania 37, streaming live as part of a two-night event, beginning at 8 ET

# Universal Champion Roman Reigns vs. Edge vs. Daniel Bryan – Triple Threat Match
– WWE Hall of Famer and 2021 Royal Rumble winner Edge chose to go head to head with Universal Champion Roman Reigns, but Daniel Bryan had his own WrestleMania main event ambitions. Returning from injury, Edge started this year’s Royal Rumble Match at No. 1 and outlasted 29 other Superstars to earn the right to to challenge the World Champion of his choosing at The Showcase of the Immortals. In the wake of his Herculean effort, The Rated-R Superstar traveled to Raw, NXT and SmackDown to scope out the World Champions before declaring that he would not announce which World Champion he would challenge until after WWE Elimination Chamber. He then showed up on SmackDown, getting involved in the main event before taking a Spear from The Head of The Table.
At WWE Elimination Chamber, Daniel Bryan outlasted five other Superstars to earn the right to face Reigns for the Universal Title immediately after the career-altering contest. With the Leader of the The “Yes!” Movement nowhere near 100 percent, The Big Dog emerged triumphant over Bryan in swift order. However, as Reigns was beginning the celebration, The Ultimate Opportunist struck with a devastating Spear on Reigns out of nowhere. Looking over the fallen titleholder, the WWE of Famer pointed to the WrestleMania banner and declared that he will challenge Reigns on The Grandest Stage of Them All. Bryan was granted a rematch and appeared to force a tap-out from the Universal Champion, but The Ultimate Opportunist derailed the encounter from his position as Special Guest Enforcer. With the controversial finish, Adam Pearce converted The Showcase of the Immortals battle to a Triple Threat showdown.
Find out who will walk out of WrestleMania with the Universal Championship in a special two-night event, streaming live on April 10 and April 11, beginning at 8 p.m. ET