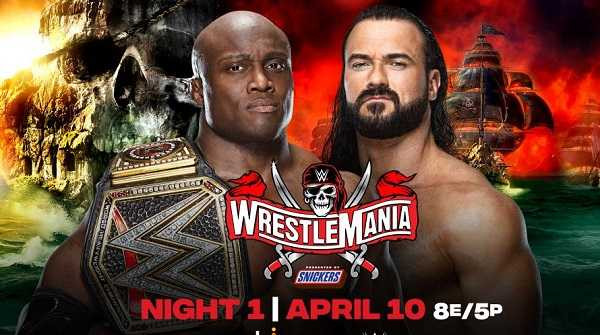 # WWE Champion Bobby Lashley vs. Drew McIntyre
– The Era of The All Mighty has begun, but one Superstar is out to transform the intense titleholder’s time into a footnote in his own WWE Title legacy. At WrestleMania, WWE Champion Bobby Lashley will go head-to-head with fellow force of nature and former WWE Champion Drew McIntyre in the opening match of WrestleMania Night 1.
At WWE Elimination Chamber, McIntyre survived five elite Raw Superstars and the career-altering structure to continue his dominant reign as WWE Champion. His celebration was cut short, however, when Lashley suddenly unleashed a fierce post-match beatdown and paved the way for The Miz to cash-in the Money in the Bank contract and steal the gold away. Eight days later, The All Mighty conquered The A-Lister in dominant fashion and captured the WWE Title to signal the start of The All Mighty Era. Nevertheless, the reign isn’t without opposition, as McIntyre immediately set his sights on Lashley with the purpose of reclaiming his gold and becoming a three-time WWE Champion on The Grandest Stage of Them All. Don’t miss when the top two Superstars of the squared circle battle it out for glory at The Showcase of the Immortals, streaming live as part of a two-night event, beginning at 8 ET/5 PT on April 10 and 11 exclusivley on Peacock in the United States and WWE Network everywhere else.

# Bad Bunny & Damian Priest vs. The Miz & John Morrison
– Bad Bunny will join forces with Damian Priest in search of redemption and a WrestleMania moment in a tag team showdown against The Miz and John Morrison at The Showcase of the Immortals. After weeks of back-and-forth, The Miz struck a new chord by smashing a guitar over the back of the Grammy Award winner on Raw. The following week, the two-time Grand Slam Champion laid down a WrestleMania challenge for a one-on-one contest, and Bad Bunny accepted after returning the favor with a guitar strike of his own. Bad Bunny showed flashes of excellence with a sky-scraping attack on Miz and Morrison at Royal Rumble, but on the final Raw on The Road to WrestleMania, Miz and Morrison poured paint on Bad Bunny’s Bugatti and attacked him. Bad Bunny and Priest responded with a proposal to change the match into a tag team bout.
Will Bad Bunny be ready when he teams with The Archer of Infamy at The Show of Shows? Or will Miz and Morrison put an end to the newcomer’s WWE career?
Catch the can’t-miss clash at the special two-night event, streaming live on April 10 and April 11, beginning at 8 p.m. ET

# Raw Tag Team Champion The New Day vs. AJ Styles & Omos
– At WrestleMania, Raw Tag Team Champions The New Day will put their newly reclaimed titles on the line against AJ Styles and his own personal colossus, Omos. Kofi Kingston & Xavier Woods reclaimed the Raw Tag Team Titles from the Hurt Business’ Cedric Alexander & Shelton Benjamin on the March 15 edition of Monday Night Raw, only to be immediately interrupted by AJ Styles & Omos, who seized the moment and challenged the new titleholders to a title match at WrestleMania. The highly decorated New Day are truly tag team royalty who can hold their own with any tandem on the planet. On the other side of the ring will stand The Phenomenal One, who has had some truly amazing WrestleMania moments. His partner Omos is a true tower of dominance but will be making his in-ring debut at The Show of Shows. And because his presence to this point has mostly been as a source of intimidation, he will truly be an X-factor of the high-stakes tag team titles showdown. Don’t miss the battle for the Raw Tag Team Titles on The Grandest Stage of Them All, streaming live as part of a two-night event, beginning at 7 ET/4 PT on April 10

# Braun Strowman vs. Shane McMahon (Steel Cage Match)
– Shane McMahon has drawn the ire of Braun Strowman in recent weeks and will now have to enter the ring with a Monster at WrestleMania inside a Steel Cage. Shane O-Mac tried various attempts to calm Strowman’s frayed nerves over the WWE Title picture and teach lessons in conflict resolution, but the only possible resolution will come inside the squared circle. After Strowman demanded an apology on Raw, McMahon appeared to initially acquiesce, but he quickly turned to poking The Monster Among Men with insults of his intelligence. The following week, an incensed Strowman had a new demand – a match with McMahon. Before the opening bell, The Monster came out mauling, but McMahon zoomed in on Strowman with repeated blows with a camera before an elbow drop through the announce table and buckets of slime brought the humiliation to a new level. Strowman sought payback at WWE Fastlane, but his plans were foiled when McMahon suffered an apparent knee injury.
On the March 29 edition of Raw, an enraged Monster Among Men held Shane-O-Mac to his word that he could have any match he wanted by choosing the match stipulation for their WrestleMania showdown: A Steel Cage Match!
How will Strowman respond to McMahon’s bullying when they meet inside the unforgiving steel?
Don’t miss the showdown at the special two-night event, streaming live on April 10 and April 11, beginning at 8 p.m. ET

# Cesaro vs. Seth Rollins
– When Seth Rollins finally came back to SmackDown, his return was unwelcome in the eyes of many fellow blue brand Superstars, but perhaps no one objected more than Cesaro. Rollins’ frustration that night prompted an all-out assault on The Swiss Cyborg, leading to a dizzying response from Cesaro two weeks later in the form of an incredible Cesaro Swing: a clear message that he would not be embracing any of Rollins’ visions. The fast-intensifying rivalry has seen Cesaro score an impressive win over Murphy, a former disciple of Rollins, and SmackDown’s Savior answering back with a win against Cesaro’s former Tag Team Championship partner, Shinsuke Nakamura, at WWE Fastlane. But when Rollins attempted to shatter Cesaro’s career with a Stomp and a steel chair on SmackDown, the bad blood reached a dangerous new level. Now, the bitter animosity can only be settled on The Grandest Stage of Them All, where Rollins has shined many times, while Cesaro aims to earn one of the biggest victories of his WWE career where it matters most. Don’t miss WrestleMania on Saturday, April 10, and Sunday, April 11, streaming live at 8 ET

# Naomi & Lana vs. Mandy Rose & Dana Brooke vs. The Riott Squad vs. Natalya & Tamina – Tag Team Turmoil
– WrestleMania glory will be at the fingertips of four of the Women’s division’s top duos as a Tag Team Turmoil Match on Night 1 of WrestleMania will determine Nia Jax & Shayna Baszler’s challengers the following night.
Naomi & Lana, Mandy Rose & Dana Brooke, The Riott Squad, and Natalya & Tamina will all do battle with a WWE Women’s Tag Team Title opportunity up for grabs. Both Raw and SmackDown Superstars have been chasing Jax & Baszler, but at The Show of Shows they’ll have to outlast the mayhem. Who will step up to the challenge and seize the golden opportunity? Catch the chaotic clash at WrestleMania 37, streaming live as part of a two-night event, beginning at 8 ET

# SmackDown Women’s Champion Sasha Banks vs. Bianca Belair
– The Boss. The EST. The SmackDown Women’s Title.
One of WrestleMania 37’s marquee bouts has “show stealer” written all over it, as Sasha Banks will put her title on the line against Bianca Belair in the the main event of WrestleMania Night 1.
While it may be difficult to believe for those who witnessed her meteoric rise through the ranks, Banks is now a battle-tested veteran on the main roster and a Grand Slam Champion to boot, though her most recent title win was arguably her most impressive. After being betrayed and brutalized by her former best friend Bayley, Banks shed a protective neck brace and immediately stepped straight into hell to challenge The Role Model for her championship in a Hell in a Cell Match. A savage fight ensued, but Banks earned the first SmackDown Women’s Title of her career by using a chair-assisted Banks Statement to force a frantic tapout. Belair caught the attention of the WWE Universe during her time at NXT and continued to do so when she made the jump to the blue brand. Nevertheless, she was still seeking a true career-defining victory, and accomplishing the herculean feat of winning a Royal Rumble Match was made more daunting when she drew No. 3 for the 30-Superstar melee. But you don’t get a nickname like “The EST of WWE” if you’re lacking in confidence, and Belair silenced the doubters by competing for 56-plus minutes, racking up four eliminations, joining forces with Rhea Ripley to toss Charlotte Flair, and finally eliminating The Nightmare after a pulse-pounding brawl in the bout’s final moments. After mulling her options for WrestleMania, Belair indeed challenged Banks on the Feb. 26 edition of SmackDown. And while she has hovered around the title picture during her time on both NXT and SmackDown, Belair has yet to earn championship gold in WWE. Will she achieve her goal on The Grandest Stage of them All, or will Sasha continue to prove exactly why she is WWE’s Blueprint? Don’t miss what is certain to be an awe-inspiring championship collision at WrestleMania 37 streaming live as part of a two-night event, beginning at 8 ET