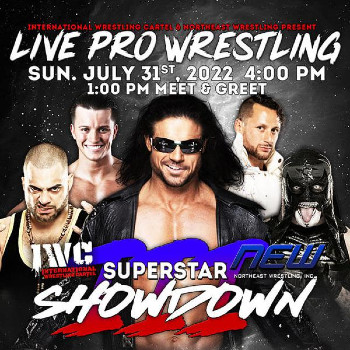 In one of many high-profile matches being presented, IWC Heavyweight Champion, “The Man Dime” Elijah Dean will defend his championship against the “Hardcore Icon” Jack Pollock. These two have tangled, for months, and because of this on-going dispute, there is more on the line than just the Heavyweight Title. IWC’s Caged Fury is on the horizon, and the winner of this bout will not only carry IWC’s largest prize into that match, but they will also give the advantage, to their team, in the War Games style affair!!

In a clash of similar styles, the “Ace Degenerate” Derek Dillinger puts the Super Indy Championship on the line against the “Mad King” Eddie Kingston. Eddie has had more than a few highly publicized moments within the last year, and he’ll bring his particular brand of brutality to this fight. Will Dillinger hold his own when it’s time to “knuckle up”?

Penta Oscuro will be one of the many “names” in action, and the AEW star will have his hands full with the “Dark Horse” of the Triple Threat, Zach Nystrom. Penta has a history of targeting and breaking arms, and unfortunately that puts a huge target on one of Zach’s few weaknesses. Can Penta put him six feet under? Or will Nystrom show “Zero Fear” when faced with the internationally known style of Oscuro?

Impact star, Matt Taven returns to Rostraver and will face a man who’s been making a name for himself on national TV, in Cole Karter. Cole recently returned to IWC, after being “left for dead” in Florida. Now Karter, coming off a recent spot on AEW TV, will try to keep his moment going, when he faces the former Ring of Honor Champion.

IWC Management has decided to hold a fatal 4-way match, for the “original” IWC Tag Team Championships. The Good Budz, The Culmination and the team of Jaxon Argos and Chase Gold, will take on the former Champions of The Main Event. TME lost the titles to the Hardy’s, at Superstar Showdown II and look to regain their spot, at the top of the division. One of these teams hopes to bring some clarity and legitimacy to these Championships, due to the recent claims being made by “Disputed” Champions of the Lebanon Don and Tito Oric.

Tune in, order today and watch right here on FITE!